If you haven't already you will need to Warm Up and Stretch .

Physical power in Hapkido is derived from the ground.   Footwork and balance, are the difference between a successful technique and disaster.  This is Left Fighting Stance also called Walking stance It is a left fighting stance because the left foot is forward.

Why do they call it Walking Stance? 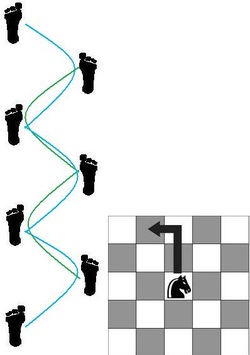 They sometimes call fighting stance a walking stance because when you move forward or backwards your feet move in the pattern that the Knight walks on the Chess board.

It is important to note that you are in fact sliding your feet, not raising and lowering them.  The motion is designed to sweep objects on the ground out of your way while you move.

At this time I want you to walk from one of the room to the other in walking stance!  If you want to test yourself scatter several harmless objects like tennis balls on the floor in your path.  A good stationary walking stance has your front knee bent and your back leg nearly strait.  Your hips and torso should be facing forward even though your back foot is at an angle.

The Physics Behind Fighting Stances

Fighting stances are what make all martial arts moves possible.  Every kick, punch, and throw will have a stance.  No stance is invulnerable and each stance has it's strengths weaknesses. The point of all fighting skill is to put yourself in a strong position while putting the opponent in a weak position.

All fighting stances seek balance between Stability and Mobility.  The image below shows a sturdy 'L' Stance on the left and a nimble western boxing stance on the right.  Your recently learned Walking Stance is in the middle. 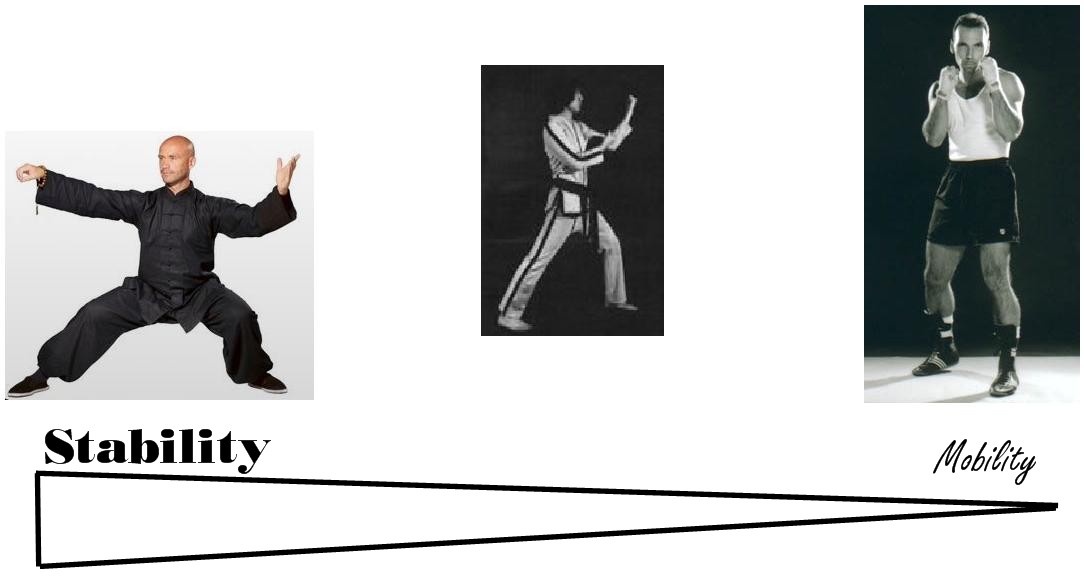 Which is best?  None of them are best, in the same way that none of them are worst.  View them as tools.  Let us say that in your toolbox you have a 1/2 inch wrench and a 3/4 inch wrench.  Neither is best and both are useful for slightly different jobs.

So why is the 'L' Stance more stable than the other two?  For two factors, first the feet are spread wide apart, this lends stability in the same way that a pyramid is more stable than a stop sign.  Which structure would better survive a tornado do you think?  So factor one is width of stance.